What's the Time in English?

There are two common ways of telling the time.

Say the hours first and then the minutes.

Another possibility of saying '15 minutes past' is: a quarter past

Another possibility of saying '15 minutes to' is: a quarter to

Another possibility of saying '30 minutes past' is: half past 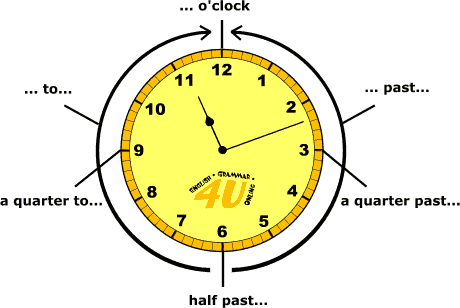 Use o'clock only at the full hour.

More formal expressions to indicate whether a time is before noon or after are a.m. (also: am - ante meridiem, before noon) and p.m. (also: pm - post meridiem, after noon). Use these expression only with the formal way of telling the time.

Example: 3:15 - fifteen minutes past three OR a quarter past three

Beside past Americans often use after.

But: in time expressions with half past it is not usual to replace past by after.

Beside to Americans often use before, of or till.

Exercise on Telling the Time