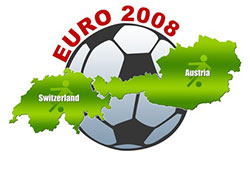 The UEFA European Championship takes place every four years, two years after and before the FIFA World Cup.

The first UEFA European Championship took place in France in 1960. The championship, then called European Nations Cup, was the brainchild of Henry Delaunay, the secretary of the French Football Federation, who was responsible for encouraging European competitions. The trophy was named after Delaunay and is still presented in his honour.

Times given in local time. In Switzerland/Austria it's 20:22 (Saturday, 2nd July) now.