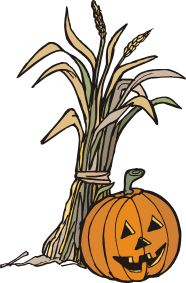 Questions on the text.

Legend has it that an Irish blacksmith called Jack shared drinks with the Devil on a Halloween night. Jack was an evil and stingy man, but he was also very clever, and he knew that the Devil had come to claim his soul. So, he quickly devised a plan. When it came to paying the bartender, Jack told the Devil, “You can take any form you wish; just change yourself into a silver coin, let me use you to pay for the drinks, and then you can change yourself back and take my soul.”

The Devil agreed and changed himself into a silver coin. Jack, however, quickly put the coin in his pocket where he also kept a little silver Cross. The Devil wasn’t able to change back to his original form, so Jack offered him a deal, “If you leave me alone for 10 years, I’ll set you free.” The Devil had no choice but to agree.

Ten years later, the Devil came back to claim Jack’s soul. “Okay, you can have my soul now,” Jack said, “Could you just climb that apple tree first and give me an apple?” The Devil thought he had nothing to lose and climbed the apple tree, but Jack quickly pulled out his knife and carved a Cross in the trunk of the tree. Thus the Devil wasn’t able to come back down again, and Jack offered him another deal, “If you promise never to come back to claim my soul, I’ll set you free.” Again, the Devil had no choice but to agree, and he never came back to claim Jack’s soul.

Many years later, Jack finally died. When he went to Heaven, he was denied entrance, because he had been so evil and stingy all his life. Then Jack went to Hell, but, as he had tricked the Devil, he wasn’t allowed to stay there either. Instead, the Devil sent Jack back to earth and gave him a burning coal as a light to guide him. Jack placed the piece of coal inside a turnip, and went back to earth, where, ever since, he has been wandering alone in the darkness.

Jack and his lantern became the symbol of a lost or damned soul. To scare these souls away on Halloween, people in Ireland carved or painted faces on turnips and placed them in windows or doorways. In America, Irish immigrants discovered that turnips were hard to get. So they started to make their lanterns out of pumpkins, a fruit native to America.