Trafalgar Square takes its name from Admiral Nelson's famous victory in the Battle of Trafalgar on 21 October 1805. Nelson's Column is 56 m high and on top you can see the statue of Admiral Nelson, who died in the battle. 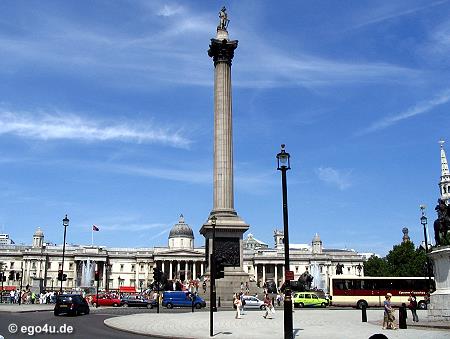 The building in the background is the National Gallery. It is a famous gallery with lots of old and valuable paintings. The entry to the gallery is free.

On New Year’s Eve, Trafalgar Square is a popular meeting place. Fireworks are not allowed in Britain on New Year’s Eve. But at midnight people hug each other, sing Old Lange Syne or swim in the fountains.