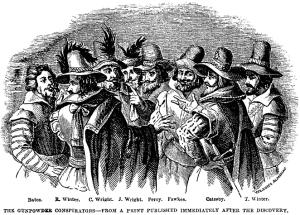 The conspirators of the Gunpowder Plot. Guy Fawkes is third from the right.

On 26th October a nobleman called Lord Monteagle received an anonymous letter telling him not to go to the State Opening. Lord Monteagle was a Catholic – this is probably why he received the letter. He was also loyal to the king, however, and immediately passed the letter on to him. So now the king knew about the plot.

In the morning of 5th November, guards searched the cellars of the Houses of Parliament. They found 36 barrels of gunpowder and arrested one of the conspirators, Guy Fawkes.

Guy Fawkes was tortured until he confessed. Some other conspirators were arrested later, and they were all hung, drawn and quartered.

5th November became known as Guy Fawkes Day (or Gunpowder Day). On this day people celebrate the failure of the Gunpowder Plot with bonfires and fireworks.

On the BBC website you can play a game and answer questions on the Gunpowder Plot to save the Houses of Parliament. Some of the answers can be found in our text.