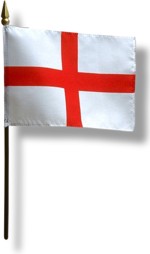 Saint George is the patron saint of England and the Saint George's Cross (a red cross on a white background) is used as England's national flag. Saint George's Day (23 April) is a National Day in England. Once an important holiday, it is, however, not celebrated that much anymore - it's not even a public holiday.

Saint George lived in the third century. He served as a soldier in the Roman Empire where he even became a member of the personal guard of the Roman Emperor Diocletian. When in 303, however, the emperor ordered the persecution of Christians, George dared to criticize the Diocletian and to confess that he was a Christian, too. This enraged Diocletian and so George was tortured and executed as a traitor on 23 April 303.

Saint George is probably best known for his killing a dragon. Legend has it that a fierce dragon lived near a town called Silene. Every day, the people of Silene had to feed the dragon a virgin, who was chosen by lot. One day the princess was to be sacrificed, but George hurried to help her. With his lance called Ascalon, George killed the dragon and saved the princess. The king and the people of the town were so happy that they wanted to reward George. George asked them to convert to Christianity and so they did.