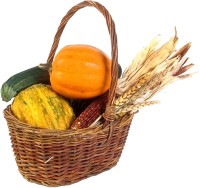 Thanksgiving is a holiday in the United States and Canada; it is closely related to European harvest festivals.

The first Thanksgiving was held in 1621. After a good harvest, the Pilgrim Fathers, who had travelled to America aboard the Mayflower, organised a great feast. They also invited their Indian friends, who had helped the Pilgrims through their first year in the New World.

In the United States, Thanksgiving lasts four days now because most people also get the Friday off. The holiday is celebrated with family and friends, and a huge dinner is served in the early afternoon or evening. The traditional Thanksgiving dinner is a roasted turkey served with stuffing, mashed potatoes, cranberry sauce, green beans and various pies for dessert.

In Canada, the first Thanksgiving was celebrated in 1710. For about 200 years, it was held for example when a royal child was born or when a battle was won. It became an annual holiday in 1931 and is now celebrated on the second Monday of October.