The Children of Lir

Lough Derravaragh
where the children of Lir turned into swans (near Mullingar, Co. Westmeath)

Once upon a time, there lived a chieftain in Ireland whose name was Lir. Together with his wife Aev, he had four beautiful children, three sons and one girl. But shortly after the birth of their fourth child, Aev died. As his children needed a mother, Lir married Aev’s sister Aoife.

Aoife was very jealous of Lir’s love for his children and so she made an evil plan. One day, she took the children to see their grandfather. On their way they passed Lough Derravaragh, the Lake of the Oaks where Aoife sent the children in for a bath. When the children were in the water, Aoife turned them into swans and said: 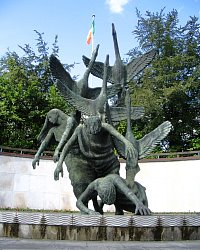 The Children of Lir
Statue in the Garden of Remembrance, Dublin

Aoife allowed the children to keep their human voices, so they could talk to one another and sing. Their songs were very sad, but their voices were so beautiful that many people stopped to listen.

About the time when the 900 years were over, St. Patrick arrived in Ireland to convert the Irish to Christianity. He travelled all over Ireland and also built a chapel at Innis Gluaire where the children of Lir had lived for the past 300 years.

One day, St. Patrick heard a wonderful song and went to find the people with those beautiful voices. He wanted to ask them to sing in his chapel. St. Patrick was surprised to find four swans with human voices. The children of Lir told him their sad story and St. Patrick asked them to come to his chapel.

So one day, the children of Lir attended mass in St. Patrick’s chapel. But when the chapel bell rung in honour of God, the swans got their human forms again. It were not the forms of children, however, but of four very old people – after all they were more than 900 years old. St. Patrick quickly gave them God’s blessing and baptized them and shortly afterwards the children of Lir died.