Questions on the text Level: intermediate

During the French Revolutionary Wars (1792-1815), Great Britain and France were fierce enemies. Napoleon even planned to invade Britain. For this, however, he needed an enormous fleet. But his main fleet lay in the Spanish harbour of Cadiz. 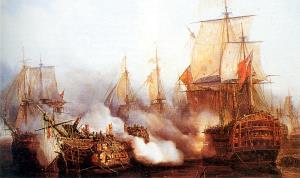 Scene from the Battle of Trafalgar

Of course, the British tried to prevent Napoleon from invading Britain. They carefully watched what Napoleon’s ships were doing and also sent a fleet down to Spain to deal with the problem. The leader of that Royal Navy fleet was Admiral Nelson.

On 21st October 1805 the Royal Navy fleet clashed with the allied French and Spanish fleet at Cape Trafalgar (somewhere between Cadiz and the Strait of Gibraltar). At about 11:30 a.m., Nelson gave the signal to attack the enemy: “England expects that every man will do his duty.”

Although they were outnumbered by French and Spanish ships, the Royal Navy fleet won the battle thanks to Nelsons great tactical maneuvres. At about a quarter past four in the afternoon, the fighting was over. But Nelson, deadly wounded in the battle, died fifteen minutes later. Still, the battle was a great success for the British as the French had to stop their plans of invading Britain and Britain remained the most powerful nation at sea.

The journey home was long and in order to preserve Nelson's body, the corpse was placed in a barrel of rum. Legend has it that the sailor’s secretely drank from that barrel – they claimed it was Nelson's Blood they were drinking and there was even a shanty called Nelson's Blood.

Back in England, Nelson was buried in London’s St Paul’s Cathedral. All over Britain, monuments were built to commemorate Nelson’s great victory at Trafalgar. The most famous memorial is in the heart of London – it’s Trafalgar Square with Nelson’s Column in its centre.

On the BBC website you can watch an animation with interesting facts on the Battle of Trafalgar.