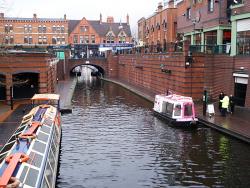 Described by former US President Bill Clinton as “An extraordinary jewel of a city,” Birmingham has undergone a multi-billion pound regeneration which has transformed it into one of the UK’s premier centres for shopping, dining, the arts – or, with its atmospheric canals and squares, simply meandering.

Ever since the confident Victorian age, Birmingham has been known as England’s second city—at the heart of the country and of England’s transport network. It’s in the middle of the motorway system, its railway station has more direct connections than any other in the UK, and its airport has links with 50 cities in Europe.

Birmingham has been given a thorough makeover, its urban landscape overhauled with the help of award-winning architects: “a butterfly emerging from a concrete chrysalis”. Where once this city was full of throughways and cars, it is now a place of pleasant open spaces with people walking and lingering. Visitors have commented on a ‘new European’ spirit, observing that its public spaces and grand buildings are among Britain’s best.

The city has a long history of invention and integration: it is still a crucible, still a manufacturing city, but one that has recreated itself as an attractive place to live and to visit: Birmingham, astonishingly, has more canals than Venice, and is now capitalising on them, with canal trips, guided walks and trail leaflets. Birmingham also has pride in its old buildings, providing new settings to show them off to advantage. In newly-modelled Victoria Square, the Italianate Council House – gold-tipped cupola, lions, glinting doortop mosaic depicting Industry and Municipality – represents a golden era of local government.

Other places to visit are Sarehole Mill, an 18th century water mill where author J.R.R. Tolkin played in his childhood and which provided inspiration for “The Hobbit”; and Bournville, the model village for workers at Cadbury, the chocolate manufacturers and now the home of Cadbury World, an essential attraction for anyone dedicated to chocolate.

A few minutes from the centre is the Jewellery Quarter, a cluster of narrow streets and cramped workshops where trade carries on much as it always has. It is Europe’s largest working jewellery quarter, with the world’s largest private mint, its own assay office – and a museum, based in the old workshop of Smith & Pepper, makers of gold bracelets. One Friday in 1981, Mr Eric, 81, Miss Olive, 78, and Mr Tom, 74, who had no heirs and could find no purchaser, ushered out their 30 employees and locked the door behind them as if for the weekend. All was left untouched for nine years, a time capsule. But the industry thrives: in November and December there is a jewellery festival, Brilliantly Birmingham, celebrating the talents of local designer-makers. Just one example of the many hidden corners of this fascinating city.