Brighton – England’s city by the sea

by Sarah Turner (courtesy of VisitBritain.com) 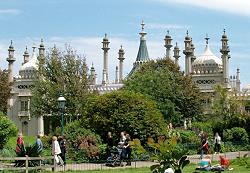 British cities tend to have a cathedral as their focal point, but Brighton has always done things differently. Instead, this city on England’s South Coast has the Royal Pavilion, a palace built in 1815 for the Prince Regent (later King George IV) so that he could meet up easily with his mistress Mrs Fitzherbert.

Other beaches have sand, but Brighton is pebbled and proud. It’s a cosmopolitan place, only an hour south of London, with a diverse population and inhabitants who are always ready to dress up for one of Brighton’s many celebrations. The Brighton Festival, England’s largest, runs in May, with street theatre, art exhibitions and music, Gay Pride takes place at the beginning of August and the winter gets Burning the Clocks, a pyrotechnic extravaganza to mark the solstice (Dec 21). Brighton is eclectic and fun and never pretentious.

Many of Brighton’s visitors fantasise about buying a house in Kemp Town, a series of white Georgian houses that face the sea front and is the poshest bit of Brighton’s seafront. Kemp Town has always appealed to actors - Sir Laurence Olivier used to live there and Cate Blanchett has moved in. At the other end of town, Paul McCartney and his wife Heather have a house at Hove, a few doors down from DJ and record producer Fatboy Slim.

Any night of the week clubs – small, intimate venues – along the seafront are humming. Fatboy Slim is still resident DJ at Concorde 2, but there’s something for every taste – house at the Zap, while the Funky Buddha Lounge lives up to its name with chill out music and a relaxed atmosphere. Next morning, head to the Fringe Café, Kensington Gardens, where the speciality is all-day old-school and modern breakfasts on the sun terrace, excellent for people watching. Terre a Terre in East Street, near the Lanes, is famous as a gourmet vegetarian restaurant while Brighton Rocks, Rock Place, serves up New England food and posh cocktails to a mixture of locals and out of towners. Try Brighton Rock, a sophisticated mix of Champagne, vanilla vodka and chambord. Brighton is second only to London for the number and variety of top-class restaurants and bars.