by Sarah Turner (courtesy of VisitBritain.com) 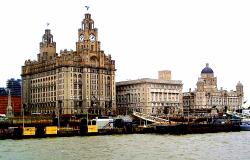 Look lost in Liverpool and someone like Terry Allen is likely to appear at your elbow. He’s one of a team of Navigators employed by Liverpool City Council. Want to see pre-Raphaelites art? The Walker Art Gallery is just by the station, and all its Victorian grandeur comes free. Anfield football stadium, home of Premier Division Liverpool Football Club? A ticket may be hard to get hold of, but anyone can go on a tour of the dressing rooms.

And the Beatles? Terry can not only show you where the Cavern was, he can tell you he saw John, Paul, George and Ringo perform when he was a teenager. Mathew Street is the hub of the Beatle experience. The pubs that they drank in are still there, along with a recreated Cavern Club (they used the original bricks) but in recent years the area has become Liverpool’s centre for high fashion, with two shops, Drome and Cricket on the site of the Cavern itself. Also on Mathew Street is Wade Smith – three floors of designer finery that mixes Prada and Gucci with the hippest British labels, including Punk Royal and Fake London. It’s just one of the reasons Tatler magazine dubbed the city Livercool.

It will be European Capital of Culture in 2008, but Liverpool is a city bursting with energy and confidence right now. The Pan-American Club in Albert Dock is a stylish bar and restaurant, which features a breakfast martini – Cointreau, gin and marmalade.

Albert Dock is also home to the Merseyside Maritime Museum. This gives the background to the city’s extraordinary wealth in the 18th and 19th centuries. In ‘Transatlantic Slavery’ the museum comes clean over Liverpool’s role in the slave trade, with a reconstruction of a slave ship, which echoes to the voices of actors reading from the diaries of slaves and slave traders. This inhumane trade fuelled Liverpool’s reputation as a port. Later, over 9 million people passed through the city, en route to new lives in America and Australasia. This wealth can be seen in the grandeur of the buildings, including St George’s Hall, with its priceless Minton tiles, the Royal Liver Building (which is topped by statues of the mythical Liver birds) and the Walker Art Gallery, which opened in 1877.

But to many, Liverpool will always be synonymous with the Beatles. Albert Dock has a permanent exhibition, The Beatles Story, and there’s also a daily bus tour – naturally called The Magical Mystery Tour – which takes in Penny Lane, Strawberry Fields and the houses where the Fab Four grew up. Two of these – Mendips, where John Lennon grew up and 20 Forthlin Road, the childhood home of Sir Paul McCartney – are open to the public. They’re run by the National Trust and although there are minibuses from Albert Dock, only a limited number of people are allowed in daily. But it’s well worth booking places. Both have been redecorated in 1950s-style – John Lennon’s boyhood bedroom was where he and McCartney wrote their first hit, Please, Please Me, while 20 Forthlin Road features a recorded interview with McCartney.