What Is Prom Night? 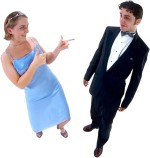 What is prom night? For your parents, prom night usually included a dinner followed by a dance at school. The entire event lasted no longer than one night.

What is prom night today? Prom night is still the most important dance of high school senior year. And like always, the night still revolves around having a date. Most teens would rather avoid the prom altogether than arrive without a date.

Guys agonize over whether the answer will be “yes” or “no” when they ask a girl to the prom. They don’t realize that girls devote months toward relationships to be asked by the right person.

On prom night, the girls spend hours getting dressed together. The guys hang out a while, and then get dressed at the last minute. Formal dress is still in, with the girls wearing gowns and the boys wearing tuxedos.

Spending the night with a rented limousine is perhaps the most popular tradition, whether individually or as a group. Before-prom dinners are still common. The boy is expected to cover these expenses.

How has prom night changed? In the last decade, some schools are renting ballrooms for the prom, and teenagers are increasingly renting hotel rooms for the weekend. A recent trend has seen groups of formally dressed teens descending on local bowling alleys before prom.

Something that has not changed is that when the boy arrives at the girl’s home, he is likely to be greeted by proud parents wielding a camera. That’s also what prom is.