The third largest city in the United States (after New York and Los Angeles) lies on the (Ufer) shores of Lake Michigan. The Potawatomi once lived in this area and the city’s name (stammt) derives from the Potawatomi word Checagou (meaning “wild onions”). The name (wurde verwendet) was used because the place (roch früher) used to smell like onions.

The Sears Tower (on the left) was built between 1970 and 1973 and is the highest building in the United States. It is 442 meters from bottom to the top floor, and reaches a total height of 527 meters (including its television antennas). 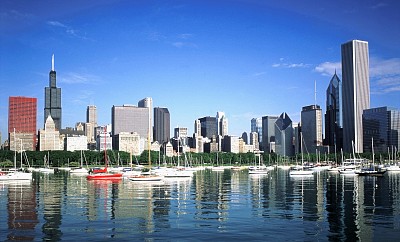 We use the simple past for situations and actions in the past. For further information, check out our grammar section: → Simple Past