by Jane Roseen (courtesy of iSnare) 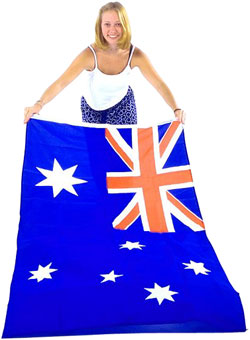 When Australia Day comes each January 26th, it brings with it a celebration of all things Australian. This celebration has greatly evolved over time, changing both its name and its content to reflect modern Australians and their pride in their country.

Australia Day began as a celebration of the foundation of the Australian colony. On January 26, 1788, Captain Arthur Phillip took formal possession of the then-British colony and became its first governor. While people throughout the colony informally celebrated this date for the next several years, it wasn’t until 1818 that the celebration was officially celebrated as part of the 30th anniversary of the colony’s settlement by Europeans.

By 1838, the 50th anniversary, it became Australia’s first public holiday. This commemoration was different in that it encompassed everyone, not just those smaller, private events of the past. This early celebration was known as Foundation Day and usually included many sporting events. Horse racing was particularly popular, as was sailing. In fact, the Anniversary Regatta (now known as the Australia Day Regatta) in Sydney is the world’s oldest continuous regatta and stems from this early athletic bent to Foundation Day.

When Australia’s centennial celebration came around in 1888, Australia was a very different country than it had been 100 years prior. Gold had been discovered, and Australia was home to nearly three million people. In 1888, all the colonial capitals, except Adelaide, proclaimed Anniversary Day a public holiday and each colony celebrated Australia’s 100th birthday.

The 150th anniversary of European settlement in 1938 brought an issue regarding Anniversary Day into the limelight. The highlight of the celebrations in New South Wales was a reenactment of Captain Phillip’s landing, complete with the deposition of an Aboriginal tribe. However, aboriginal people in the city refused to participate in the reenactment and instead, several hours prior, Aboriginal activists convened a 'Day of Mourning' conference aimed at securing citizenship and equal status for Aborigines. This was the first time Aboriginal complaints were so prominent on Anniversary Day, but it wouldn’t be the last.

In 1946, the Commonwealth Government, States and Territories agreed to observe Australia Day under one name and on the same day. The celebrations continued to have a distinct slant towards the European settlers, and consisted largely of reenactments of the First Fleet’s landing and the events that immediately followed.

Looking to promote a wider celebration of Australia Day, the National Australia Day Council was formed in 1979, with state and territory councils and committees soon after. These groups have worked towards more local and individual involvement in Australia Day, rather than it just being another holiday. When 1988 brought Australia’s bicentennial, it marked two distinct celebrations. The classic reenactment of the First Fleet’s voyage was held. However, alongside the celebrations, 1988 was named a Year of Mourning for Australia’s Aboriginal people, who also regarded the year as a celebration of survival. To many people, Australia Day is still best known as Survival Day.

Finally, in 1994, it was legislated that all the states and territories endorsed the celebration of Australia Day on the actual day instead of the closest Monday. Universal Australia Day celebrations have been held on January 26th ever since.

Jane S. Roseen is the Owner and President of Harmony Sweets. Harmony Sweets’ mission focuses on individual consumers purchasing gourmet chocolates from around the world for their friends and relatives as birthday, anniversary, Christmas, Valentine's Day and Mother's Day gifts, as well as corporate gifting. Website: http://www.harmonysweets.com