→ Questions on the text

The Grand Canyon is one of the most spectacular natural features on earth. It is listed as one of the Seven Natural Wonders and became a United States national park in 1919. The park covers an area of nearly 1,900 square miles altogether.

Carved by the Colorado River, the Grand Canyon slices deep into the Colorado Plateau and forms one of the most scenic landscapes in the world. Its altitudes range from about 1,200 feet above sea level to 8,803 feet. The width of the canyon varies from less than a mile to more than 18 miles; in some places the canyon is more than a mile deep. 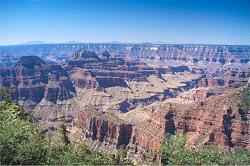 Because of the great length and depth of the canyon, the park includes many different physical and biological environments. The climate is varied too, ranging from desert to subarctic climate. This is the same climatic variation that can be found between northern Mexico and central Canada.

299 species of birds, 74 kinds of mammals, 8 species of amphibians, and 40 kinds of reptiles are found in the canyon.

The first inhabitants of the Grand Canyon were the Paleo Indians. They arrived 11,000 years ago and were descendants of Asian people who had migrated to the North American continent at least 25,000 years earlier, during the Ice Age. It was only in 1540 that the Grand Canyon was discovered by white settlers.