by Bob Barton (Courtesy of VisitBritain.com) 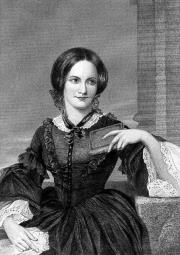 A gaunt building on the edge of beautiful, lonely moors is a place many thousands visit every year. Haworth Parsonage, in a wild and brooding part of Yorkshire, Northern England, is the place literary pilgrims head for. Here, three sisters, broken down with sickness, worked on their great love – writing poetry and romantic fiction. Their books stand out, lonely landmarks of English literature. Here the author of ‘Jane Eyre’, Charlotte Brontë, died at 38 years old, 150 years ago.

From early childhood the countryside of heather-covered wild moors, still there today, provided inspiration for the sisters, Charlotte, Emily and Anne Brontë, who all had work published under pseudonyms.

It is difficult to focus on just one of these fascinating women. To speak of one is to bring in all three, for their fortunes were closely intermingled. Publishing new work seems to have been as hard a road 150 years ago as it is today. The first novel, ‘Jane Eyre’, was published in October 1847; it met with increasing success for Charlotte. Then came Emily’s chance for fame, ‘Wuthering Heights’ and Anne’s ‘Agnes Grey’ followed later the same year.

Charlotte went to school at Roe Head, where she later worked as a teacher. She fell ill, suffering from melancholia, and gave up the post. Her first love was writing, creating an imaginary world as she had done since childhood. At age 21 she asked poet Robert Southey’s advice about her writing prospects. ‘Literature cannot be the business of a woman’s life’ – he answered, ‘and ought not to be.’ Her first novel, ‘The Professor’, was not published in her lifetime but, undeterred, she started on ‘Jane Eyre’, which captivated Victorian readers.

Charlotte’s death, on March 31 1855, during pregnancy, came a year after her marriage and several years after the death of her literary sisters and wayward brother, Branwell. Her life will be commemorated during the 150th anniversary year at her parsonage home, now a museum, in Haworth; in poet’s corner at London’s Westminster Abbey and with a commemorative Royal Mail stamp issue. A famous portrait of the sisters, by Branwell, is on display in the National Portrait Gallery, London.

‘Jane Eyre’, the powerful novel about an educated but impoverished orphan and her hero, Mr. Rochester, who turns out to have an insane wife hidden in the attic, remains popular today, in film and TV versions as well as the printed word. Many people wonder how such a dramatic work could have been written by a shy and reclusive woman. The answer must be that all three girls were endowed with colossal imaginations.

The town of Haworth has a thriving business at the heart of Yorkshire’s ‘Brontë Country’, near Keighley, focused on the Parsonage Museum where the women lived, daughters of the strict Reverend Patrick Brontë. Being unmarried females it was a lonely life. Charlotte travelled, going to London and also to work in Belgium twice (once with Emily) where she fell disastrously in love. The three were very close, but remained in Yorkshire and worked in solitude. The sisters had a routine of walking around the dining room table in the evening, planning their novels and other projects. Upstairs is the room where she died, less than a year after marrying her father’s curate, the Reverend Arthur Bell Nicholls.

Haworth still has its cobbled street, old dwellings and weavers’ lofts on its hillside, the church and the Black Bull Inn where their brother Branwell caroused. There is also the Worth Valley Railway from Keighley (Haworth Station was used as a location in the film ‘The Railway Children’) with regular services by vintage steam trains.

From Haworth you can walk out on to the moors that the sisters loved so much, and less than four miles’ walk away is Top Withens, the inspiration for Emily’s ‘Wuthering Heights’. In fact the well-marked Brontë Way footpath is 40 miles long, from Haworth to Wycoller Country Park. Wycoller’s ruined hall was the model for Ferndean Manor in ‘Jane Eyre’.

Near the historic market town of Ripon in North Yorkshire is Norton Conyers, a mid-14th century house, home to the Graham family since 1624 (limited opening, tel. 01765 640333). The story of a mad woman who, a century before Charlotte’s visit in 1839, had been confined to the attic, was used by her as the basis for Mr Rochester’s house, Thornfield Hall, in ‘Jane Eyre’. On the coast is the lively seaside resort of Scarborough, where Charlotte took her dying sister Anne on her last journey: she is buried at the town’s St. Mary’s church.

The girls’ parents were not local, they came from Ireland and Cornwall and married at Guiseley Church near the lively Yorkshire city of Leeds. Here, the girls met and picnicked at the picturesque Kirkstall Abbey ruins. Their father, Patrick Brunty changed his name to Brontë to honour Lord Nelson whose title it was. Mrs Brontë had six children in nine years, but her increasingly lonely husband outlived them all, dying in 1861.

For more information on touring Brontë Country and other landscapes that have inspired writers, see VisitBritain’s website www.visitbritain.com.