The area had long been inhabited by native Americans, the Ohlone (meaning “people of the west”) before the first Spanish immigrants came to settle in this part of the country. After the Mexican-American War, the small town became American territory, and when the California gold rush started in 1848, the population (increase = (zahlenmäßig) zunehmen, ansteigen) increased enormously. Nowadays San Francisco is famous especially for its cable car and the Golden Gate Bridge. 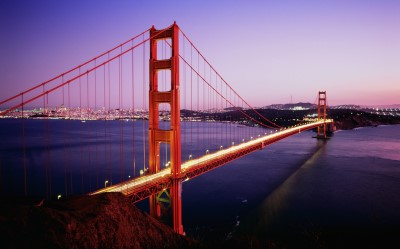 Construction on the bridge began in 1933 and was completed in 1937. The bridge rises 230 m above the water. With its total length of 1970 meters it was the longest (Hängebrücke) suspension bridge in the world until 1964. The bridge is part of the United States Highway 101, has six (Fahrspuren) lanes and a footpath on each side.

Relative clauses are formed with »who« or »that«. We use »who« for people and »that« for animals, things or events.